Past Energy Breakthrough participant, Chris Hamilton, has secured a debut ride with Team DSM for the 2022 Tour De France. This selection marks yet another stellar milestone for the Bendigo-born and raised rider, who participated in the Energy Breakthrough between 2011 – 2013.

This selection marks yet another stellar milestone for the Bendigo-born and raised rider, whose past success has included winning the 2016 U-23 Australian National Road Race Championships and the 2019 Best Young Rider classification at the Tour Down Under. To date, he has been on the startling at the Giro d’Italia five times and the La Vuelta a Espana twice – but this is a first for Le Tour de France.

At Team DSM he will be riding in support of great French hope Romain Bardet, a three-time stage winner and podium finisher.

On behalf of the Energy Breakthrough community, we congratulate Chris on his selection and wish him all the best for his Tour!

Chris Hamilton and the Energy Breakthrough

Chris Hamilton was a participant at the Energy Breakthrough at Bendigo South East SC and later Bendigo Senior Secondary College in 2011 – 2013. He was part of a memorable team that in 2012 built a vehicle on-site from scratch in Maryborough in a day was called ‘D.I.Y’. It was so good that it took line honours in the 24 hour trial Sunday. Chris is pictured below – front row on the right. 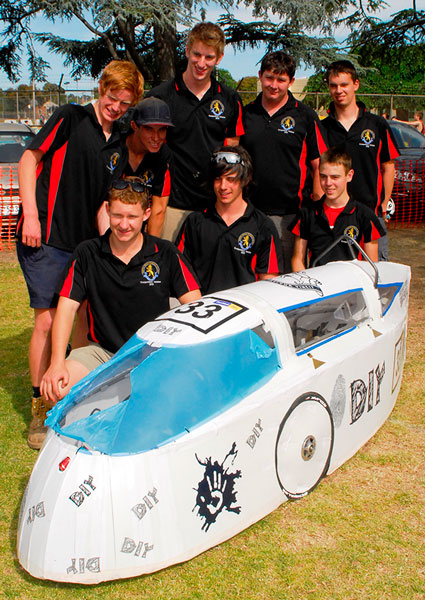 Back in 2019, after Chris won the ‘Best Young Rider’ classification in the Tour Down Under, he spoke of his time in the Energy Breakthrough, what Chris enjoyed most was the facets: the fitness, the vehicle building and the time with mates:

“I liked that you got to go out and train with your mates every week after school,” Chris said. “The [Energy Breakthrough is] one of the things that really got me into cycling more looking back on it now.”

“Then to spend a few days camping at the event was so much fun (plus it meant a few days off school!). I also appreciate now how much valuable knowledge I got from actually building our vehicles at BSSC.”