This extraordinary feat is even more amazing given it was just seven weeks ago that Steele broke four vertebrae in a training event. His recovery was sped up by cycling on a human powered vehicle (HPV) at his home in Mornington as the position was highly supportive for his fragile back and neck. Channel 7 interviewer, Sam Lane, nicknamed him the ‘Man of Steele’ for his heroic effort on Saturday on the Gold Coast.

This was Steele von Hoff a month ago, riding a mountain bike for the first time in a neck brace after breaking four vertebrae. Today he became Commonwealth Games champion with gold in the road race. One of the most incredible things I’ve ever seen. pic.twitter.com/TfgzHBsxqr

How did the race unfold?

In a tense final 10km, Von Hoff was in the lead group with Cameron Meyer and a collection of strong riders from New Zealand, South Africa, England and Wales. Despite a number of attacks and surges, the bunch came together for the sprint in the final few kilometres and Meyer lead out Steele beautifully for him to launch his attack for the win!

“With 150m to go I thought ‘I’ve actually got some pace here, I could win this’ and the reaction of the crowd told me I’d got the gold.

“I don’t think it’s even sunk in and absorbed yet, the realisation will probably hit tonight that I’ve actually done it.”

Remember the days in the old school yard? 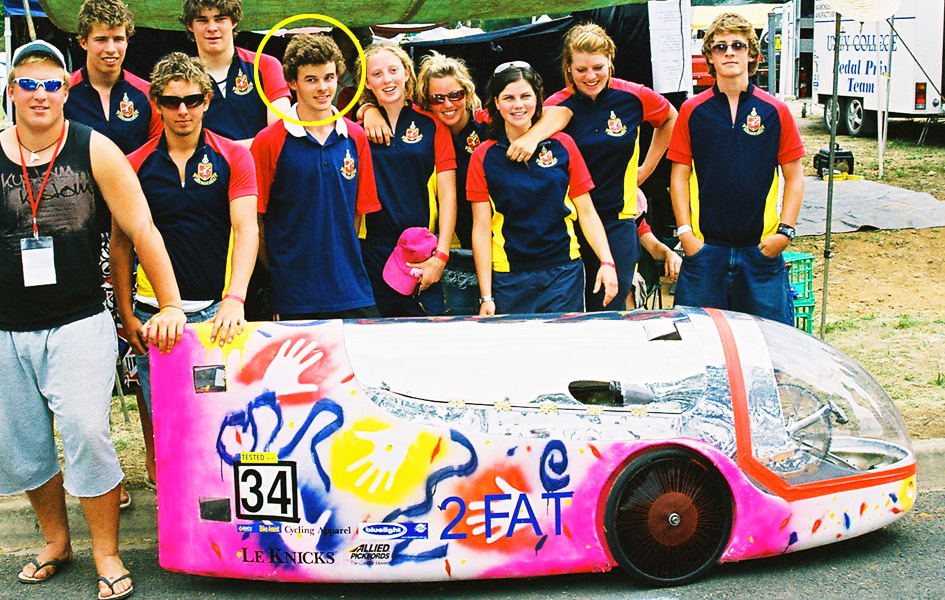 Steele was involved in the Energy Breakthrough over three years with Mt Martha Primary School and The Peninsula School between 2002 – 2004. He was also an exceptional rider for Community Teams, winning the Australian International Pedal Prix on a number of occasions, too. (We hope he won’t mind too much, pictured above here, fifth from the right in 2004)

“My heroes and idols when I was at school were my training buddy’s that I looked up to. Back then I wasn’t into cycling yet, I was still chasing my dreams as a triathlete!” Steele said of his cycling ambitions at the time.

“But when Human Powered Vehicles all started for me in Grade 6 and I used to train for trikes at lunch times on Wednesdays for a hour; all we wanted to do was have fun, and I think that’s the main thing about the Energy Breakthrough!”

What impact did you see Energy Breakthrough having on other students?

“I saw it bring people together, and do things that they normally wouldn’t be confident doing.” Steele said of the impact the Energy Breakthrough had when he was at school.

What would you say to people about EB?