Meet Dylan from St Augustine’s in Maryborough. He and his team have just finished 10th overall in the Pushcart class out of 39 teams at the 2018 Energy Breakthrough. Dylan has Down syndrome, but that hasn’t stopped him or his team participating or celebrating. This International Day of People with Disability on 3 December, we want to bring into focus stories like Dylan’s, but also the many young people with a disability who participate in our event. 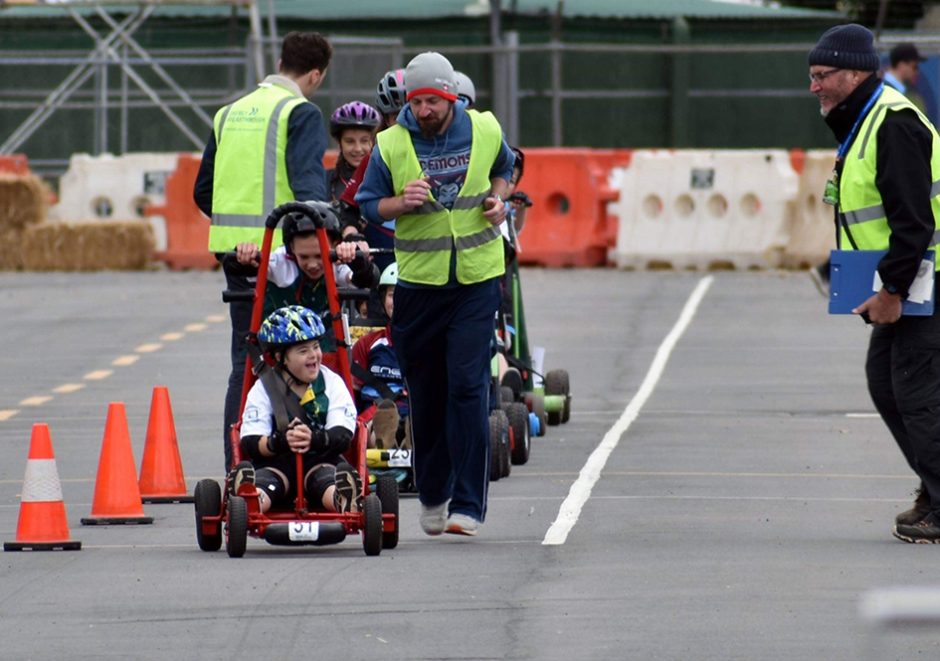 We’d had a number of emails prior to the event between our EB team and the St Augustine’s PS Team Manager, Kyra Wood. As Dylan and his teammates were preparing for the event, Kyra wanted to ensure everyone was confident that they could participate safely and enjoy themselves.

Ruby was paired in the pushcart events with Dylan. Dylan was really nervous before the start of the Endurance event – he wasn’t sure how he was going to go and Ruby later admitted she was a little anxious, too. Normally, the driver and the pusher switch over, but in this case, Dylan would ‘drive’ both legs of the relay (I’m sure he didn’t mind). But as Ruby’s mum, Melissa, told us later, there was no need for either of the kids to worry:

“The race starter from the Energy Breakthrough, Rob, was just so wonderful. He gave Dylan high-fives at the start and the end of his event, and put everyone at ease. Ruby loved it and so did Dylan. The look on Dylan’s face says it all!”

Later that day, Dylan was an active and valued member of the team’s Display & Presentation and competed in the pushcart sprint event on Saturday, too. He and his team finished 10th overall in the Pushcart class out of 39 teams at the 2018 Energy Breakthrough. Well done Dylan and the ‘Super Saints’! 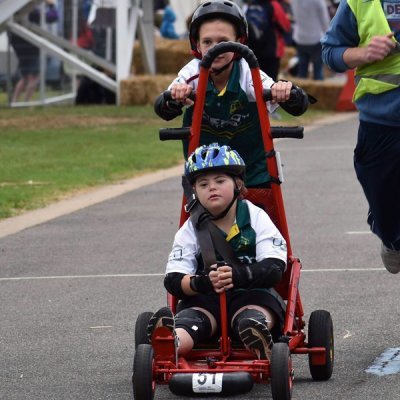 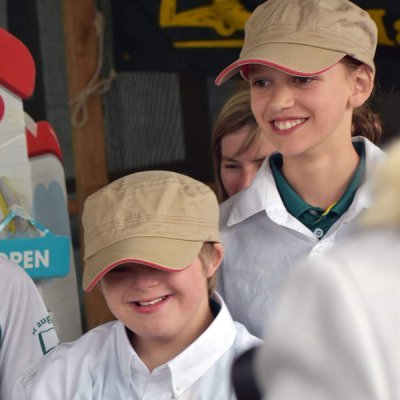 We actually celebrate people with a disability by … letting them blend in.

We actually celebrate people with a disability by … letting them blend in. We don’t believe that is a “cop-out.”
It’s what teachers and team managers from many specialist schools – along with parents of children with a disability – have told us over the years. One thing they love about the Energy Breakthrough is that everyone can participate and compete alongside each other. There are no special categories or events for people with a disability.

See our earlier story about Ballarat Specialist School as an example of this.

Yes, sometimes students are accommodated with some special parameters – such as Ruby doing a ‘double-stint’ of running with Dylan or a team may be given the ‘first pit’ in a pit lane so it is easier for their kids to find their pit spot in one of our HPV events – but generally they are able to compete alongside everyone else.

Mary Preston coordinates the TRYathlon event and with its short relays and 8-hour endurance, it has proven an excellent way for young people with a disability to participate.

“I have six teams from Specialist schools in the TRYathlon and all of the other teams are very encouraging.”

“One memorable moment came from Maryborough Education Centre – Specialist School this year in the Obstacle event.” Mary shared. “Most other teams took 10 minutes for their eight riders to complete the course, while MEC took 18 minutes. All of the others teams were clapping, cheering and making plenty of noise on the barriers when they are finishing – the MEC kids loved it!”

Mary also received a thank you card from one teacher at a Special School who has been coming for ten years. He thanked us for our patience and encouragement to have their kids involved.

We want this to continue! If you have young people with disability at your school, please DO think about how you can include them in future editions of the Energy Breakthrough. If you are unsure or have any questions, please contact us.

We want to see more smiles like Dylan’s and ensure that ALL young people have a chance to learn, grow and be powered by imagination.

Editor’s Note: We received permission to share Dylan’s story from his family. Thank you.