The 2015 School’s Handbook is now available to download and is your comprehensive guide to this year’s RACV Energy Breakthrough. Visit the Downloads page now to get your copy >

As we flagged earlier this week, the RACV Energy Breakthrough Executive Committee, have been working together on a number of new ideas for this year’s event. Read that post here >

Firstly, these changes form stage one of a three-stage plan. The next two stages promise more event capacity where demand is strongest and to improve the experience for visitors and spectators.

We wanted to make sure we had all of these big changes in place before entries opened. Of course, we would have preferred for this information to be ready for you earlier, but we only received some of the required approvals this week.

So, here’s a rundown on those three big changes and why they’ve been made: 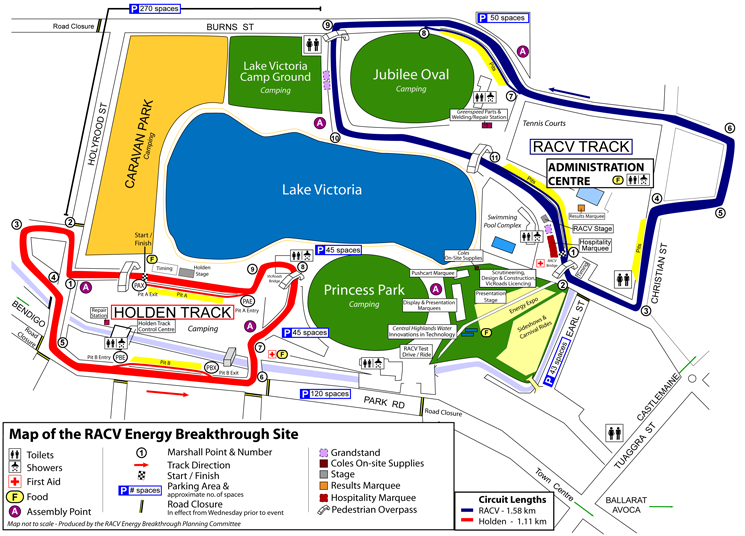 What will the new section of RACV track be like?
View map >

The new section will add 235 metres and bring the total length of the track to 1,575 metres. This is the first significant modification to the RACV Track ever. It’s not billiard table smooth and reflects real world conditions.

As they climb up the hill, riders will take a right hand turn off Christian St, after ALDI, followed quickly by a left-hander leading into the uphill Crameri Lane.

As riders reach the top, they’ll take a sharp left onto Burns St (commonly known as the ‘back straight’). From here they’ll rejoin the traditional RACV Track.

We have held significant safety concerns with the Try-athlon Primary Class participating on the Holden Track alongside the Energy Efficient Vehicles (EEVs) under their previous arrangements.

We believe that the mix of Secondary HPVs and EEVs on an expanded RACV Track is more appropriate and safe.

One of the concerns surrounding the EEV’s sharing the track with other vehicles is their weight and with this in mind we have incentivised the reduction of weight by including it as a portion of the Design and Construction score from 2015 onwards.

We have also excluded two seater vehicles from the event from 2015 onwards as we believe these increase congestion.

The HPV and Try-athlon categories for the Energy Breakthrough have been at capacity for several years with waiting lists in place in many categories. Entries each year for the EEV category, however, have remained between 20 and 30.

We love the EEVs – they speak to the core of the ‘Energy Breakthrough spirit’ and are really at the pointy end of energy efficiency – BUT the reality is that it is very difficult to justify operating a track for 16 or 24 hours for so few teams.

The reduction in track time will help us better respond to the marshaling demands across the event. Marshaling was a hot topic after the 2014 event and there’ll be revised and improved Marshall training, developed in collaboration with and through the support of other events.

The automotive industry appears to be focusing more on electric drivetrains through pure electric vehicles and (plug-in) hybrids. (Like the Holden Volt pictured above left, for instance)

There are several companies in Australia offering eBike conversion kits that can be adapted to a HPV with relative ease.
These kits do not significantly increase the weight of the vehicle.

Allowing for future growth of Try-athlon

The Try-athlon category began life as a spin-off event for teams on the HPV Waiting List. It now has a dedicated following and we believe that in the future (not necessarily in 2015) this category will grow as well.

Big Change #2: The Pushcart Schedule has been completely redeveloped

To improve the experience for students and teachers, reduce waiting times for events and improve the connection to other categories.

What are the changes?

The Design & Construction and Scrutineering components have been combined on Thursday afternoon, requiring teams to be on-site earlier, but allowing more time for the process to take place.

The Endurance event has shifted to the Holden Track and Friday morning, which we hope will offer a better experience for students and their families, as well as reduced waiting times. This will also act as an exciting curtain raiser to the HPV A Trial and offer schools with teams in both categories to cheer their teams.

Also flagged earlier this week, Human Powered Vehicle Class A and Try-athlon Class A teams will now have the opportunity to run up to a maximum of ten riders. You’ll still have to have an even gender ratio of boys to girls too.

We’re well aware that the popularity of Human Powered Vehicles is booming in many Primary schools, and this is one immediate way that we can respond initially to that growth in demand.

Now, don’t forget to download the 2015 School’s Handbook from our Downloads page and enter >