Saturday 27th and Sunday 28th of April 2013 saw the first year of the Knox Grand Prix for Round 3 of the Victorian HPV Series at the Knox Civic Centre. The new track saw sixty six entrants across nine categories compete over six hours on a tight and skilful 610 metre track. Saturday afternoon’s practice session saw many teams test out the track in dry conditions, with many finding the track challenging with the first corner catching many teams out countless times. This was a trend that continued right until the end of the race!

And onto the results….

Junior Secondary Class was taken out by Zoniac from Victory Christian College on 218 laps, ahead of St Margaret’s and Berwick Grammar School’s Taurus on 210 laps. Following by only 6 laps behind team Taurus was Tooradin Primary School’s Red Rocket on 204 laps.

It was Grigio from St Joseph’s College in the Middle Secondary Class that took out the win on 228 laps ahead of second place getters Whipper Snipper from Victory Christian College on 222 laps. Third place was given to Kooweerup Secondary College’s Flippers on 216 laps. 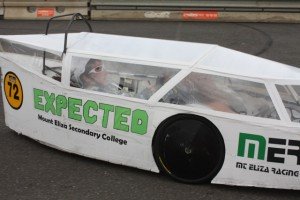 Open Secondary Class had a battle on its hands as the top four teams raced against the clock to take out the top place. This race was missing one of Berwick Grammer’s top year 11 riders, Mitch Graham who unfortunately was unable to compete due to a recently fractured collarbone. He shared his slightly saddened thoughts with us: “It’s disappointing that I’m not out competing and riding with the boys today on the track. But hopefully they’ll pull off another win without me!”

However, it was Caufield Grammar School’s BYO that finished in first place on 262 laps in front of St Margaret’s and Berwick Grammar School’s Zeus finished in a strong second place with 251 laps, even after suffering some severe mechanical difficulties. Third place was excitedly received by Lynx also from St Margaret’s and Berwick Grammar School on 250 laps, and fourth place was received by Dangerzone from Woodleigh School on 249 laps. Open Secondary Class proved to be a very close and tough race for the top four place getters in this category.

A dominant performance from the girls at St Margaret’s and Berwick Grammar School’s placed top team Ceto on 259 laps in front and claiming the win ahead of their fellow team-mates Cassi. This impressive result put the girls from Ceto 7th overall. 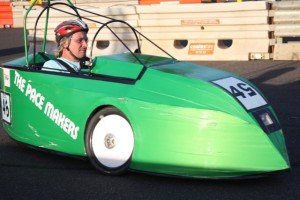 The new Veteran Category was introduced to the Knox Grand Prix this year where all the ages of the riders need to be over 35. There was only one entrant in this category with the appropriately named team The Pace Makers from EDEC receiving the win with 258 laps and coming eighth overall.

With eighteen entrants across Community Class, it was We’re Back! from EDEC claiming not only the category, but the overall win on 275 laps. It was an impressive effort from Crusoe College’s team UNO throughout the day, climbing 15 laps and finishing off only one lap behind first position.

The Hybrid Community Class was won by the Knox Falcons from the The Knox School on 194 laps, who also received an honourable mention for competing in their very first HPV race.

In the Hybrid Secondary Class with only four entrants, it was Cobden Technical School who took out first and second place on 248 and 233 laps respectively. Third and fourth place went to two of Mater Christi College’s teams, Pink Spark on 168 laps, and Pink Lightning on 120 laps.

[quote]“… I encourage all teams to give Bridge Builders feedback on the event and how we can improve. I would also love to see all the teams back here next year!” ~ Phil Stenhouse – CEO, Bridge Builders[/quote] The final round of the Victorian HPV Series for 2013 sees us back at Casey Fields in Cranbourne on Saturday and Sunday October 12th and 13th for another thrilling and exciting 6 hour race! We hope to see you all there.

The team at the RACV Energy Breakthrough wishes to remind you that entries Round 4 at Casey Fields in Cranbourne close at 5pm Friday September 27th 2013.