The 2013 human powered vehicle season is off to a flying start with Round 1 of the Victorian HPV Series held down in Cranbourne on February 23. Warm conditions presented race goers with an interesting, yet exciting six  hours of racing (some even did eight hours!)

Some teams began arriving as early as 7am in order to tackle an obstacle course event which offers participants an opportunity to experience, practice and perfect their HPV racing skills in a relaxed atmosphere with a competitive edge. The track consisted of a ramp, rumble strip, and off road dirt track section – which provided plenty of challenges for the riders involved!

Obstacle Course:
With only 11 teams entered across 2 categories with Emerald District Education Centre’s (EDEC) Blue Thunder taking out first place in the community class, followed very closely behind their own teammates 49% Angels finishing on the same lap with only 4.5 seconds separating the two! The primary section was taken out by St Margaret’s and Berwick Grammar School’s Shooting Star for the second year running ahead of Tooradin Primary School’s Red Rocket with again a close finish of only 3 laps behind their rivals.

Six Hour Event:
With conditions already warming up at 10am, competitors were ready to race and bring home a win to put in their history books.

With the largest number of entrants the Community class proved to be a competitive day for teams as Tru Blu Racing and Aurora Racing battled it out for the title and swapped the lead numerous times throughout the day. But in the end it was Tru Blu from Tru Blu Racing that snatched the win from Aurora, as an unlucky flat tyre just 10 minutes before  the chequered flag cost Aurora precious time and the chance of victory.

The Veterans class was taken out by EDEC’s Pace Makers having completed 130 laps, but marginally behind them was Shagged from Maiden Gully Community Racing on 128 laps. All riders in this class must be over 35 years young to participate. 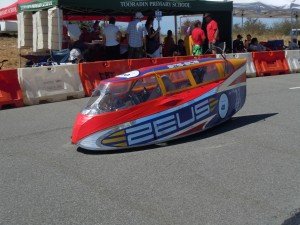 With a strong Open Secondary section, there was a dominant performance from St Margaret’s and Berwick Grammar School’s Zeus with 142 laps, this placed them inside the top 10 of overall teams on the day. In second place was their own teammates Lynx with 130 laps and third place from Woodleigh School was Helter Skelter.

Senior Secondary class was taken out by Expected from Mt Eliza Secondary College on 137 laps and behind them with 127 laps was EDEC’s Fire Breathing Rubber Duckies.

Victory Christian College’s Whipper Snipper led the Middle Secondary class from start to finish with 124 laps and second place went to Electric Feel from Woodleigh School 13 laps behind the winners.

Entries in the Junior Secondary category were down compared to previous years, however teams still came prepared to battle it out for the win as the lead continually changed throughout the day. The category was ultimately won by Zoniac from Victory Christian College over Insane Boltz from Jells Park Primary School. 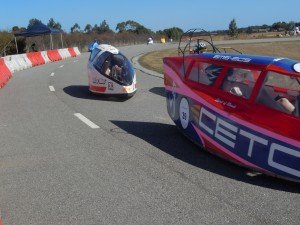 Open Female proved to be one of the closest finishes of the day with St Margaret’s and Berwick Grammar School’s Ceto snatching the win from Maiden Gully Community Racing’s top team Hit or Miss with just 1 lap separating the two teams. A crucial win for the girls from St Margaret’s and Berwick Grammar School’s after trailing behind by 7 laps earlier in the race due to some technical problems.

“I’d like to thank the many number of participants, teachers, volunteers and all involved who made the day a success.” Casey-Cardinia HPV and Cycling Club President John Mills said at the end of the day. “Congratulations must go to all the riders that rode in the warm conditions and we all look forward to seeing you at Round 2 in Wonthaggi at the 24 hour event.”

A reminder that entries for Round 4 at Casey Fields in Cranbourne close on Friday 27th, September 2013 at 5pm.

About the Victorian HPV Series

The Victorian HPV Series takes place over four events, with teams collecting points at each round throughout the year.