A massive field of 165 teams tested their vehicles and fitness in the first round of the 2012 Australian HPV Super Series. Most teams hailed from across South Australia and along with a few keen teams making the long journey interstate. This race was held on the 27th of May with a 6 hour event held on the fast paced Adelaide street circuit. The weather was kind thankfully as any chances of rain soon disappeared as a gleaming sun shined over the track.

As the race drew closer and the teams assembled onto their grid positions, the event atmosphere became apparent as the front straight soon became a flood of colourful vehicles and enthusiastic team members.

As nervous riders set out upon their starting lap behind the pace car, the Australian flag soon gave way to the starting order and chaos soon prevailed into the first corner as riders jostled for position and smooth lines.

Tom Floyd of Bendigo was one competitor which travelled interstate to compete in his first race on the smooth Adelaide circuit; Tom rode for Dirty Mongrel Racing. Here’s what Tom had to say about his experience in starting the race.

[quote color=”#999999″]“Being my first time there I found the track very fun, but the corners came up a lot quicker than expected a few times! Once we got a few laps in the traffic was just extreme and it was very hard to find fast race lines through all the vehicles”.~ Tom Floyd, rider [/quote]

Speaking with Jason Lentakis team manager and teacher at Pembroke P-12 school he explained that the school pedal prix team is proud to construct their own vehicles in class. Allowing his students to gain a further understanding of the construction methods and techniques which building vehicles enables.

Dylan Bode of Pembroke P-12 school, rode in the Paradox vehicle and spoke to me about his training leading up to the event:

[quote color=”#999999″]“Our team practices here (Victoria Park) on a regular basis, although our lap times are usually around 10 to 15 seconds faster just due to the clear track, so the extra traffic makes it difficult to achieve fast times.” ~ Dylan Bode, Pembroke P-12 Rider[/quote]

Crashes were a regular sight for riders and spectators around the circuit.

As the hours pasted by many teams found the large amount of vehicles on the track a challenge for all, as vehicles became looking a little worse for wear from when they had started. Nevertheless the entire event ran smoothly and many teams found themselves with a benchmark set to improve on for the remainder of the series.

As the results go……

Category one Primary schools, was as always a hotly contested race right through to the finish, with only 3 laps separating the top three finishes. In the end team Highgate Hot Rod from Highgate primary school finished 2 laps clear from the Flying Hubcaps of Aberfoyle Hub school/ APHS, which finished one lap ahead of the team of Rocket from Aberfoyle Park primary.

To Category two, the junior secondary field was won by an interstate team from Victoria in the Fire Breathing Rubber Duckies vehicle coming from EDEC HPV. Four laps behind the Victorians was the vehicle from Immanuel college Ice which had a smooth race to finish a further five laps clear of Raging Hubcaps of Aberfoyle Hub school APHS finishing in third place. An honourable mention must also go out to the rider of Evolution from Aberfoyle Park, who was able to set a new track record for the category completing a lap time of 1:35.43 seconds.

In the highly competitive senior secondary category three field, the absents of Paradox from Pembroke school maintained a consistent lead to finish three laps ahead of second place and notably finished in 9th place overall. Second was taken out by Blurred Vision of Loxton High school which held their lead over the team from Aberfoyle Hub school APHS in their vehicle Screaming Hubcaps. The team Victorious secret from EDEC hpv was the first all-female category team home which kept the boys honest by finishing seventh overall in category three. 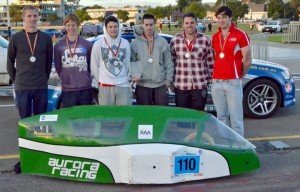 To the community field now in category four, another Victorian team proved too strong for the South Australian teams, with Aurora Racing having a smooth race to finish nine laps clear of Outlaw from team Ballistic which suffered mechanical issues towards the end of the race otherwise keeping a close gap on the Victorians. Third place was awarded to Strathdale racing which fought back hard from some major crashes for a well-earned position on the podium for their first time.

With the first round of the Australian HPV Super series now finished many eager teams will be busy preparing their vehicles and improving their fitness to improve on their results for the remaining two rounds of the series.

All teams which competed in the first round of the series should be congratulated on their efforts in racing in such a clean and safe manner. 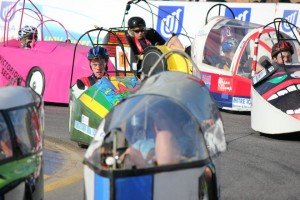 A massive thank you must be go out to the Australian International Pedal Prix committee which always ensure that each round of the series runs smoothly and that each competitor has a safe and enjoyable race. A mention must also be made of the team members who provided corner marshals and other important official duties allowing for a safer event to be ran for all competitors.

Full race results including fastest lap times can be found at: www.hpvresults.com.au

The next 6 hour round of the Australian HPV super series will raced on the 29th of July around the enclosed Adelaide street circuit, followed by the Australian International Pedal Prix 24 hour race to be held in Murray Bridge on September 15th and 16th.

About the Author: Russell Nankervis

Russ Nankervis has grown up around Human Powered Vehicles, after his older brother Rowan got into them at high school. He's participated in a host of events across Victoria and South Australia for Bendigo South East SC, Bendigo Senior Secondary College, as well as community teams Strathdale and Aurora Racing.