Over the past 27 years, we’ve seen many different way teams celebrate the achievements and milestones they reach at the Energy Breakthrough on Sunday afternoon. And 2017 was no different! After NINE years of participation, Year 12 student David Somers decided to celebrate his final stint at Maryborough Dan Riccardo-style: with a water-filled ‘shoey’!

When the checkered flag fell on the end of the 24 Hour Trial at this year’s RACV Energy Breakthrough, it also marked the final year that Berwick Grammar School’s, David Somers, would participate as a student in the event.

At the culmination of an impressive nine years of HPV riding for his school, David stepped out of his team’s vehicle PerZeus and responded in true Daniel Ricciardo style: an unusual – and slightly nauseating- shoey! 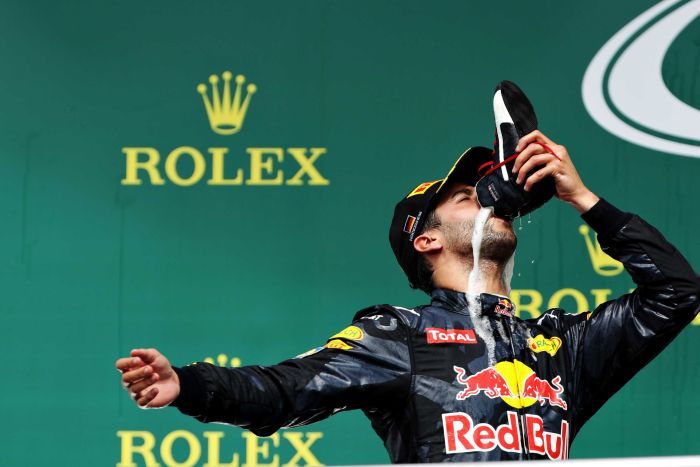 A “shoey” has become the celebration of choice for Australian Formula One driver Daniel Ricciardo when he reaches the podium (and we won’t mention those Australian dudes ‘aka the Budgie Nine’ who performed a shoey at the Malaysian Grand Prix, in their jocks and got in some trouble). He’ll often coerce the poor podium interviewers, including former Aussie F1 star Mark Webber, to do a shoey, too.

It’s become such a thing that you can even buy Shoey t-shirts.

Whilst Dan drinks champagne on the F1 podium, we’re assured David was only consuming water and he used his own sweat-filled cycling shoe to keep it as authentic as possible.

When we caught up with him and asked him about the photo doing the rounds on social media, he told us “well it was kind of an out of the blue idea”.

“Emotions were running pretty high as it was the last time I’d be riding at the Energy Breakthrough, and it was even more special finishing the Trial. I needed a special way to mark the end and then I just thought: ‘I’ve gotta go for a shoey!'”. ~ David Somers

“It was water definitely in the shoe, but given the hot weather and the fact that I’d be riding the last stint – I wouldn’t be surprised if it was 20% sweat too! It definitely wasn’t the best tasting drink, but the taste was overpowered by all of the emotions”.

Emotions aside – nine years of participating at the RACV Energy Breakthrough is an incredible feat! Well done David and thanks for the memories of 2017!

About the Author: Taegan Westin

Taegan got her first taste of the Energy Breakthrough when she assisted in the organisation of the Energy Expo component back in 2001. During her high school days she worked in the Promotions & Marketing Department at the Central Goldfields Shire and has been involved with the creation and execution of social media and website content for the Energy Breakthrough since 2016. Taegan is a skilled social media manager who has experience with some of Australia’s biggest businesses and brands. In 2018, Taegan has launched her own digital marketing business.