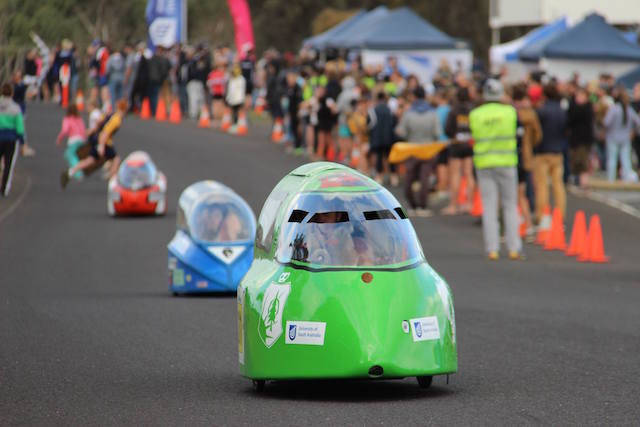 51 teams from across the state of South Australia and Victoria ventured to the city of Mt Gambier in the state’s southeast for the inaugural event; the 2016 season opener of the Australian International Pedal Prix series. Teams completed laps around the 2.4 kilometre track at McNamara Park motorcycle circuit in a test of endurance over 8 hours of sweeping bends, uphill and downhill sections and fast straights.

Onto the race results….

Category 4: Open
With only 9 laps separating the top three teams it was a face paced 8 hours of racing for these teams. Platt Racing from Trump Trikes took the win with a top speed of 53 kilometres per hour and finishing strongly on 162 laps. Only lap one behind them were Wattle Racing’s Toothless on 161 laps. On 153 laps it was Adimov from Gtrikes who took out third place, only one lap ahead of fourth place getters Margarita from Trisled.

Masters: (Riders over 30 years of age)
With only two entrants it was a close battle between Father & Son who with only two riders completed an impressive 136 laps putting them 9th on the overall leaderboard. EDEC HPV Team’s Pacemakers took out second place and finished only one lap behind them on 135 laps.