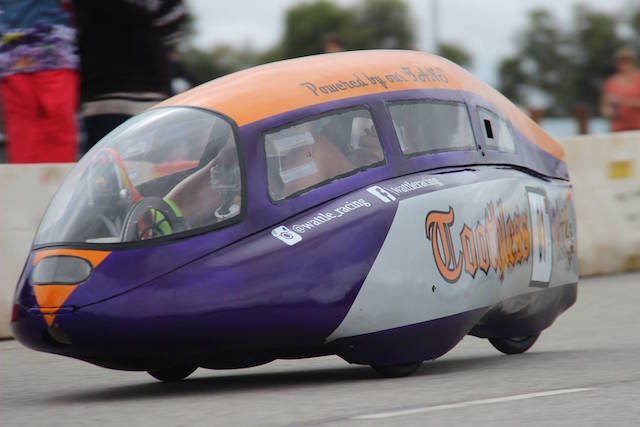 Last Saturday the 27th of February saw 82 teams’ head to Melbourne’s South-eastern suburbs for the first round of the 2016 Jet Couriers Victorian HPV Series held at Casey Fields in Cranbourne. A 6-hour trial saw tight finishes across many of the categories but here are the race winners:

*To be eligible to win the female category teams must have 100% female riders.

Junior Secondary: A tight race between the top three place getters with only 10 laps separating them but it was Torpeco from White Hills Primary School who pulled away in the final moments to prove victorious on 120 laps, with Overtakers from Frankston Primary School finishing on the same number of laps and third place getters Grand Slam from Mornington PS/Mornington SC on 110 laps. *Junior Female winners in the Junior Secondary class were Dinky Dots from Mt Eliza Secondary College finishing on 68 laps.

Middle Secondary: Another tight finish between the top two place getters in this class but it was Infinity from Creek Street Primary School finishing on 131 laps only two laps clear of second place getters Chrysaor from St Margaret’s and Berwick Grammar (SMS/BGS) finishing on 129 laps. Third place getters were VCC1 from Victory Christian College on 118 laps.

Senior Secondary: Gremlins from EDEC HPV Team finished on 132 laps only one lap ahead of second place getters VCC2 from Victory Christian College finishing on 131 laps. 10 laps behind them were third place getters The Chief from Western Port Secondary College on 121 laps. The girls from Pegasus from St Margaret’s and Berwick Grammar School proved too strong once again, being victorious and taking out the senior secondary female win on 124 laps. Runner up were Dark Horses from EDEC HPV Team finishing on 112 laps and third place getters Wally from Western Port Secondary College on 98 laps.

Open Secondary:2015 RACV Energy Breakthrough dual winners A Little Too Aero from Woodleigh School proved their strength and endurance finishing on 149 laps, 3 laps behind them were Intrepid from Girton Grammar School finishing on 146 laps. Third place went to Perzeus from SMS/BGS finishing on 145 laps.

Open Community: A continual battle between both Trisled and Wattle Racing it was 2015 overall winners with Toothless from Wattle Racing that took out the category win on 169 laps and 5 laps clear of The Hubbards from Trisled on 164 laps. Third place finishing on 159 laps were Whipstick from Wattle Racing.

Mixed Community: For riders to enter into the mixed community class they must have a minimum of 2 female riders. Improvement Nooted from Trisled finished on 127 laps, 6 laps behind them were the Fire Breathing Rubber Duckies from EDEC HPV Team on 121 laps. Third place was awarded to Zeus from SMS/BGS finishing on 104 laps.

Veterans: With only two entrants in this class it was Scorpius from SMS/BGS who took out the class win on 133 laps well clear of team-mates Electra finishing on 98 laps.

With Round 2 fast approaching the series moves down to the Bass Coast where teams will participate in the 24 Hour Wonthaggi Grand Prix held from the 19th – 21st March 2016.

All series information and documents can be found at: http://cchpvcc.org.au/?page_id=1161