With warm and pleasant conditions, a dark threatening sky setting down on the final round of the 2015 Victorian HPV Series down at Casey Fields with a record-breaking number of 128 teams took to the track; making the event the largest in Victoria on a single track for a HPV race. 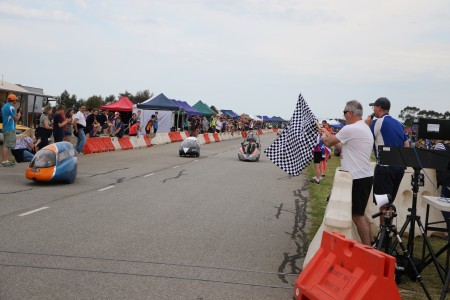 With an impressive fifty-two entrants across the Junior Secondary Class it was a battle for first place with only 7 laps separating the top 4 teams. Overtakers from Frankston Primary School took out the round win on 97 laps, only a lap ahead of second place getters and series winners* Miss Janey from Maiden Gully Primary School finishing on 96 laps. Third place getters were Vortex from Victory Christian College and only 4 laps behind them were fourth place getters Velocity from White Hills Primary School.

*To be eligible to win the Victorian HPV Series in any category you must have completed in at least 3 rounds with points awarded in all four rounds.

In the Middle Secondary College class it was a close battle between Infusion from Girton Grammar School finishing on 92 laps, and finishing on the same lap was team Taurus from St Margaret’s and Berwick Grammar School. Third place went to Gremlins Too from EDEC HPV Team finishing on 85 laps and taking out the series for the category.

Intrepid from Girton Grammar School in the Senior Secondary Class proved too strong and finished on 110 laps and ahead of second place getters Fire Breathing Rubber Duckies from EDEC HPV Team who finished on 103 laps, third place getters went to Highview One from Highview College on 100 laps. However, it was the Fire Breathing Rubber Duckies took the series win by only one point ahead of Intrepid. What a year of racing from both teams!

The boys from SMS/BGS proved too strong with their team PerZeus in the Open Secondary Class finishing strongly on 115 laps ahead of second place getters Asphalt Melter on 103 laps, and third place getters Velocipede from Victory Christian College finishing on 99 laps. Series winners was awarded to Asphalt Melter from Woodleigh College.

With one of the strongest fields and eight entrants in the Open Female class the girls Wattle Racing with team She’s The Man and raced hard against the girls from SMS/BGS with team Pegasus and finished ahead snatching the win on 101 laps and breaking the nineteen consecutive race wins for the SMS/BGS team an incredible feat by the Wattle riders. Third place went to Spudz from Frankston High School on 87 laps. Series winners were taken out by Gremlins from EDEC.

Community Class and the series win  was taken out by Full Tilt from Relentless Racing on 127 laps, second place getters Whipstick from Wattle Racing finishing on 120 laps, and third place getters only one lap behind were HP15 from HPRACING. With only two entrants is was Toothless from Wattle Racing finishing on 127 laps taking out the series win, overall win and category Community Elite Class ahead of second place getters Trisled 1 from Trisled on 123 laps.

With only one entrant in the Community Female class and a trial category for the final round of the series it was Out of your League from Wattle Racing finishing on 107 laps and putting them an impressive twelfth overall. 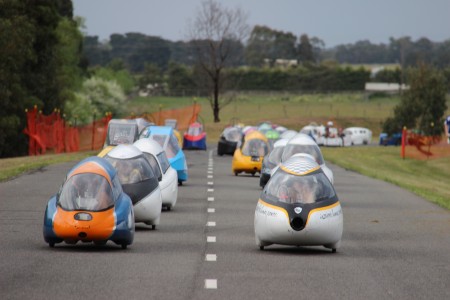 Community Solo was represented by a select four entrants who took on the challenge of riding 6 hours solo and what an impressive ride they all made. However, it was Alex Holden who took out the win on 108 laps putting him only 20 laps behind the overall race leaders from Wattle Racing. Second place getter Jeff Neilsen finished on 99 laps, third place Tim Marquardt close behind on 97 laps and fourth place Ben Goodall on 43 laps.

With the closest race ever in a category the close in the Veteran Class it was won by PUDS Racing finishing on 112 laps, a lap ahead of second place getters G2 Flyer from G2 Racing G2 Racing finishing on 111 laps. Third place went to PaceMakers from EDEC on 98 laps. Based on count-back with two firsts and two wins under both teams belts for the series it declared a tie and announced that both G2 Racing and PUDS Racing were joint series winners of the 2015 Victorian HPV Series.

[quote align=”center” color=”#999999″]“I would like to thank all the teams for attending the final round of the 2015 Victorian HPV Series at Casey Fields. Today was a great test for organisers as it was the first time we ever had over 100 teams being represented on our track. We are excited for the continuing future development and expansion of this event in years to come. ~ Nathan Boon : President, Casey Cardinia HPV and Cycling Club[/quote]