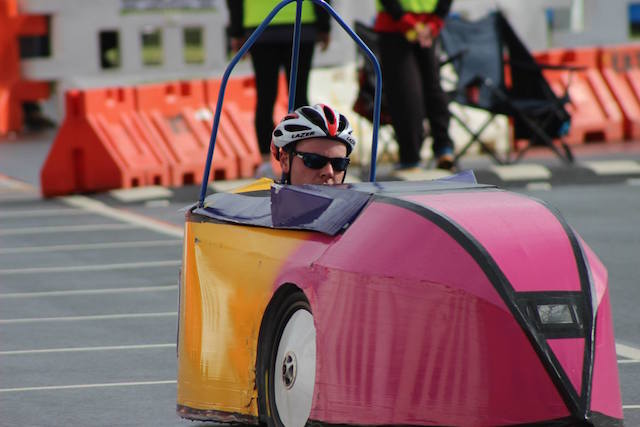 A field of 41 took to the short track held at the State Basketball Stadium located in Wantirna South for the 2015 Knox Grand Prix held last weekend. With showers and light winds forecast, riders experienced a slippery ride for the 6-hour endurance trial.

As the results go…

In Junior Class it was Shooting Star from St Margaret’s and Berwick Grammar School (SMS/BGS) finishing on 129 laps; ahead of second place getters Red Rocket from Tooradin Primary School only lap one behind them on 128 laps. Third place went to Marvel from Marvel HPV finishing on a strong 125 laps, only 5 laps behind the category winners. A very close top three finish in this category.

With only 12 laps between category winners and fourth place, the Middle Secondary Class was a race to watch. First place was taken out by Taurus from SMS/BGS on 161 laps, on 152 laps and in second place was taken out by Gremlins Too from the riders at Emerald District Education Centre (EDEC), third place was Hulk from Frankston High finishing on 143 laps, and in fourth place, Cassiopeia from SMS/BGS on 131 laps.

Only two entrants in the open secondary class; it was the Fire Breathing Rubber Duckies from EDEC taking out first place on 168 laps, ahead of Zeus from SMS/BGS on 154 laps in second place.

Open Secondary  having the largest category of competitors with fourteen teams it was Perzeus from SMS/BGS finishing strong on 177 laps and 38 laps ahead of second place Scorched from Kooweerup on 139 laps, and third place Waverly Warriors from Waverly Christian College on 136 laps. Well done to the boys from Perzeus for taking out second place overall on the day.

In the Community Class it was Team Trisled from Trisled that took out the overall win, and category win in the class, with an average lap time of 1.52.9 giving them an impressive 190 laps in 6 hours of racing. Second place went to Favourites from EDEC finishing on 154 laps, and in third place was Ceto from SMS/BGS on 148 laps.

Two competitive teams took to the track in the Open Girls category to battle out for the category win, but it was the girls from SMS/BGS with their vehicle Pegasus finishing on 162 laps, placing them an impressive seventh overall and ahead of second place getters Gremlins finishing on 127 laps.

Reminder:
Round 3 of the Victorian HPV Series will be held at the Bendigo Livestock Exchange on August 22nd for a 10 Hour EEV/HPV Grand Prix and entries are now open! Find ‘Bendigo EEV/HPV Grand Prix’ on Facebook or visit www.bendigoeevhpv.wix.com for more details