Cambodian team update: So near and yet so far….

Cambodian team update: So near and yet so far…. 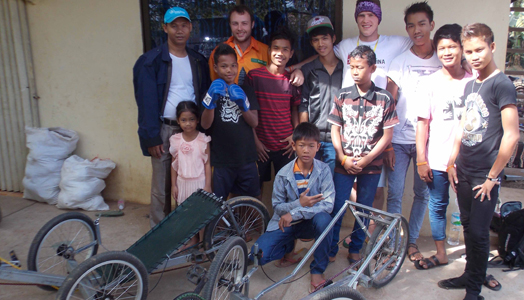 “It’s 6,964 kms from Battambang, Cambodia to Maryborough, but at the moment for the Rode RAGE team, it feels so much further. ~ Tony Davidson, Rode RAGE Team Manager”

As many in our RACV Energy Breakthrough community would know, throughout this year the Rode RAGE team have been partnering with the Energy Breakthrough – in conjunction with several schools around the state – to bring a team from Cambodia to participate in this year’s event. The team was a group of young people from the Cambodian Children’s Trust (CCT). Sadly, last week the team received notice from the Australian Embassy in Phnom Penh that it was not going to be possible to get visas for the team to come to Australia. This is despite involvement from two Federal MPs, three Federal Ministers and a number of letters of support for the project to the Ambassador in Cambodia. Team Manager, Tony Davidson, shared more about just how close the team was to starting the journey from Battambang, Cambodia to Maryborough: “Two training trikes were built in Cambodia in January, passport and visa applications were commenced in March, fundraising events were held throughout the year, the race vehicle is built, the Display & Presentation script is written, Team shirts were sent to CCT, flights were booked: all was looking good,” Tony said. ABOVE: The team in Cambodia ready to go.

Tony continues… “The road block has been trying to marry the bureaucratic systems of two distinct countries, which given the unique circumstances of all of the children, proved far too difficult. Australia is a very lucky country, a fact which makes visas quite a challenge to get. Our team here, and in Cambodia, worked very hard, and the embassy were as helpful as they could be, but we just couldn’t satisfy the requirements of the Australian Embassy and so disappointingly (even more so for the CCT team) the visas were rejected. We do however understand that Cambodia is a country where child trafficking is not uncommon and that the Embassy applies the strictest standards, without exception, for the protection of all Cambodian children especially those from vulnerable backgrounds.”

To those in the Energy Breakthrough community who contributed:

“Many of you in the Energy Breakthrough community contributed to the fundraising to bring the CCT team out and we apologise that we have not been able to complete the project.  Some of the funds have already been lost on fare deposits, translation of documents, travel from Battambang to the Embassy, visa application fees etc.” “At this stage, we are investigating with the Embassy as to whether or not we can try again for next year. If that is possible, we will minimise the losses and maximise the experience for the CCT kids by simply delaying the project until 2014.  If this is not possible, we would donate the balance of the funds directly to CCT to support the amazing amount of community development work they do in Battambang. However, if any of you are not happy with that, please contact us and we will happily refund your contribution.“

ABOVE: The team in Cambodia learning construction skills and techniques in Cambodian with the Rode RAGE team.

So, what’s next for Rode RAGE? Khmer Rode RAGE and Reef RAGE

Well, they still have a hybrid entry on the Holden Track this year, and a group of students will be returning to Cambodia and Thailand in January to again physically lend a hand, donate as much money as we can raise as part of our Khmer Rode RAGE project and catch up with our long distance friends at CCT and the Wilderness Friends Foundation Thailand. In September 2014, it’s back on the road in Australia for Reef Rode RAGE – a 3,106km ride from Ballarat to Pt Douglas in Queensland plus however many laps we can do during the 24 hours of the RACQ Technology Challenge in Maryborough Queensland along the way.   This ride is to raise awareness of the clear and present dangers posed to the Great Barrier Reef by new fossil fuel projects and climate change and to raise more funds for sustainable charities (and to have an enormous amount of fun, whale watching, snorkeling and meet new friends too.

The Rode RAGE team have kept a few positions open for non Rode RAGE members, for riders, mechanics, PR, IT, cooks or just enthusiastic people with no skills but who would like to make new friends and make a real difference to a fairer and more sustainable world.

Please visit www.cambodianchildrenstrust.org if you or your school would like to make a donation or even sponsor a child.

About the Author: Lachlan Hickey

Lachy probably never knew what he was in for when he first volunteered to help out on the Holden Stage at the 2009 RACV Energy Breakthrough. Whilst he participated in the Innovations in Technology category back in 2005, he has been on the 'other side of the fence' ever since and now manages the event's website, wifi network and Holden Stage. Away from the Energy Breakthrough, Lachy is heavily involved in the local Maryborough community across events, community radio and theatre and he was nominated for the for the Saward Dawson Community Service and Volunteering award in 2013.