How Far Would You Ride for Your Sister?

How Far Would You Ride for Your Sister? 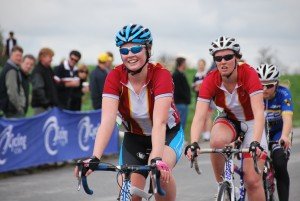 Beginning tomorrow, Sophie Weston – a year 12 student and HPV captain at St. Margaret’s and Berwick Grammar School is taking on an ultimate challenge to ride from Canberra to Melbourne, completing a massive 800km journey to raise money for the charity Love Your Sister.

About the charity: Love Your Sister

Love Your Sister is a charity that aims to raise money and awareness for the thousands of women diagnosed with breast cancer each year. When the man behind the charity, Samuel Johnson, discovered his sister, Connie (only a year separating the pair) was diagnosed with cancer for the 4th time in her life, Sam set the unbelievable challenge to ride 15,000km around Australia. Sam’s cycle was not going to be achieved on a bicycle, he set the ultimate challenge to complete his adventure on a unicycle!  Sam’s aim is raise $1 million towards breast cancer research, and at the same time smash the Guinness World Record for the longest distance covered on a unicycle.

Over the past week, RACV Energy Breakthrough reporters Nathan Boon and Katie Harris, sat down with Sophie to find out about her and her planned adventure… 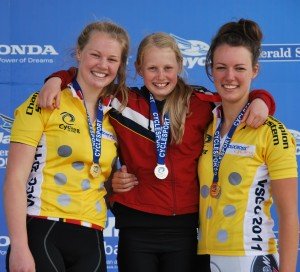 Nathan: Why did you decide to participate in the ride from Canberra to Melbourne?
Sophie: I have been involved in cycling through St. Margaret’s for a few years and have really enjoyed it. When it came to deciding what to do for my Duke of Edinburgh residential project, I thought it would be awesome if I could incorporate cycling in some way. I wanted to set myself a challenge that is recognisable between two iconic landmarks – from Federation Centre to Federation Square. I also wanted to ride for a cause and believed that the ‘Love Your Sister’ charity was a very deserving one.

Katie: What does the Gold Duke of Edinburgh Award involve? Tell us more.
Sophie: The Duke of Edinburgh Award is a program that aims to involve young people around Australia in a variety of activities that engages and empowers them to achieve their full potential. There are three levels of the award and I am currently participating in my final Gold award. This section requires a commitment of an hour each week for a period of twelve months in the areas of physical recreation, skill and volunteering as well as doing an adventurous journey. A section of the Gold award is the residential project, which aims to expand people’s horizons through a challenging five-day adventure. My bike ride will fulfil this section of the award.

Nathan: When are you participating in the ride from Canberra to Melbourne?
Sophie: I am heading up to Canberra on the 8th of April and then leaving from Parliament House early the next morning. I will hopefully be arriving in Federation Square in Melbourne on April 14th.

Nathan: Where will you be riding? Will it be a hard ride?
Sophie: I will be riding from Canberra to Orbost on the Monaro/Bonang Highways, then a rail trail to Bairnsdale. From there I will be taking quieter back roads to Berwick. The final day I hope to complete the ride with some of our squad from St. Margaret’s and Berwick Grammar using bike tracks from Berwick to Federation Square.

Although the ride starts at a higher altitude, it is not all downhill. The Great Dividing Range crossing and plenty of open spaces for headwinds will make for some tough riding.

Due to the distance and isolation of the ride, I expect it to be very tough. Although I feel physically fit for it, I know it will be a difficult challenge of endurance and require a lot of mental strength for day after day of riding.

Katie: Have you done any special training for this ride or can anybody participate?
Sophie: In the lead up to the ride, I have been doing extra riding on top of my usual squad training with St. Margaret’s. In the last 6 weeks, I have been riding at least 5 times a week, including road riding, mountain bike riding and have had two really good HPV events at both Casey and Wonthaggi, which has been great preparation for the trip.

Nathan: How much money are you hoping to raise?
Sophie: I don’t really have a set amount that I would like to raise, however I just want to contribute as much as I can to Love your Sister. I have been fundraising through the St. Margaret’s and Berwick Grammar School HPV squad as well as through fundraising events at St. Margaret’s School. Everyone has been really supportive of the cause and we will hopefully raise a significant amount as well as promote breast cancer awareness.

Katie: How can the wider community support you?
Sophie: The wider community can support me by donating money, which will all go towards the Love your Sister foundation. The main focus of my ride is raising money for this charity, so the biggest support would be to continue raising awareness and funds for this particular cause. Take a look at their website by clicking here for extra information!

Nathan: Who else will be supporting you along the way?
Sophie: My family has been such a great support for me in the lead up to the event, both during training, fundraising and preparation. My dad and sister will also be joining me on the ride as a ‘support vehicle’. They will provide food, technical support as well as help me to keep safe while I am riding on the road. I will be riding most of it independently, but they will hopefully be riding some sections with me.

The St. Margaret’s and Berwick Grammar School’s HPV team will also be a great support for me on the final day of the ride. Members of the team will be joining me and riding the last day from Berwick to Federation Square, which will be a highlight of the trip.

Reporter Katie Harris also had a chance to talk with Sophie’s coach, Terry Trevena from St. Margaret’s and Berwick Grammar School and spoke with him about his thoughts on Sophie and her decision to participate in the Love Your Sister charity ride. 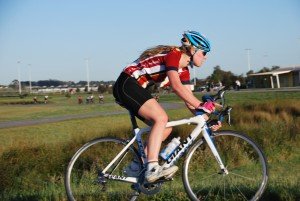 Terry: As Sophie’s coach, it is difficult to decide what the most endearing aspect of Sophie’s personality is. I do not think I have ever met a young person who is so willing to put the needs of others ahead of herself and given this, I was not really surprised when she embarked on this project. Sophie will spend her life trying to do things that will make other people feel better.

In 2013 Sophie was chosen as our HPV and Cycling Captain. She is the leader of our seventy five riders and was chosen because of her ability to be such an outstanding role model. Her ability is outstanding: she was All Schools State Champion in both road cycling and mountain biking in 2012 and has the all time female fastest lap at the RACV Energy Breakthrough. Time and time again she has helped lift the St. Margaret’s female team to victory.

Sophie’s determination is legendary at school and a number of times, when other riders have been injured, she has stepped up and ridden incredibly long and fast shifts. Sophie has the record of the most number of state schools titles by an individual in cycling and mountain biking at St. Margaret’s School.  Possibly however the thing I always think of with Sophie is the ease with which she breaks into a massive grin, even when performing under pressure. Everyone, including me, loves Sophie.

Sophie wishes anyone who wants to donate to Love Your Sister, to head to the website for full details on how to donate.

We thank Sophie and Terry for their time and wish Sophie all the best for her ride from April 9th – April 14th 2013.

To read about more stories from the Love Your Sister team, show your support or to donate, check out their website and like their facebook page: