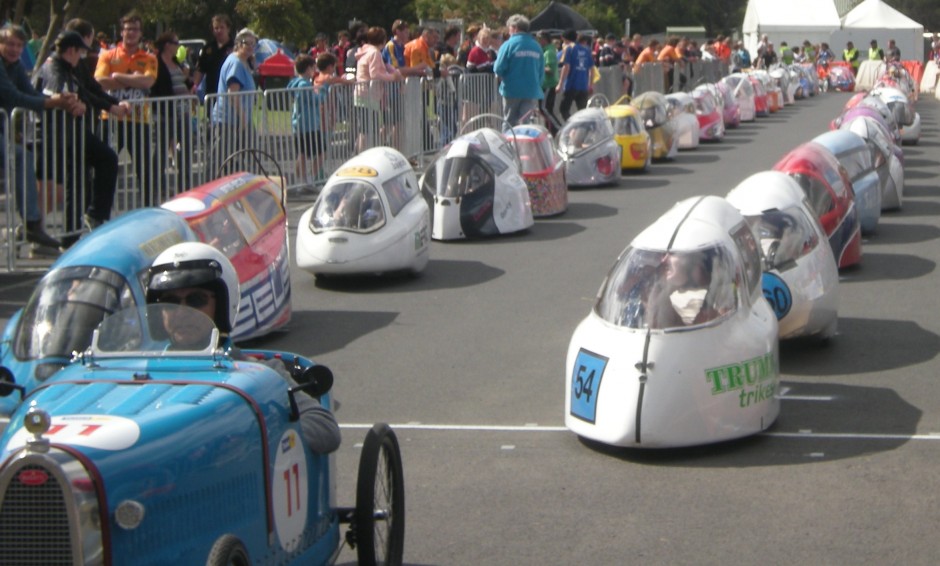 Two weekends ago saw the running of the 16th annual Wonthaggi Human Powered Grand Prix, Round 2 of the 2013 Victorian HPV Series. With 86 entrants competing around the streets of Wonthaggi, teams battled it out over the 24 hours completing a combined total of 35,873 laps, covering a whopping 50,222 kilometres – a distance equivalent to one round the world trip, plus more!

With threat of showers throughout the weekend teams were set for an exciting and hopefully rain free race!

And onto the results… 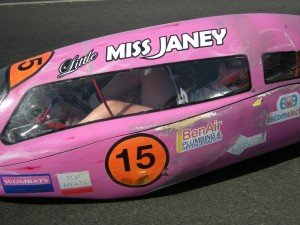 Junior Secondary Class
The Junior Secondary class proved to be another successful event for the riders from Maiden Gully Primary School with their team Miss Janey taking out the class with 316 laps, ahead of their own team-mates Ziptar on 297 laps. St Margaret’s and Berwick Grammar School’s Taurus came in third place with 281 laps.

Junior secondary teams competed for 16 hours around the 1.4 kilometre circuit and had a compulsory break between 10pm and 6am. Even with this compulsory break, the riders and crew from Miss Janey finished ahead of five teams who were able to complete the full 24 hour race! What an exceptional result from these young riders!

The excitement and passion was evident with 11 year old Sienna telling us: “I loved racing HPV’s this weekend and had lots of fun spending time with the older students”.

Middle Secondary Class
The Middle Secondary class was killed by vehicle number 22, Hope It Floats from Bendigo South East College with 469 laps, ahead of Crusoe College’s Uno who took out second place ahead of Something Else from Caufield Grammar. Design and Construction was awarded to Eaglehawk Secondary College’s Damn It’s Big.

Senior Secondary Class
With only five entrants in the Senior Secondary Class, it was Emerald District Education Centre’s (EDEC) Fire Breathing Rubber Duckies that stole the win ahead of Mount Eliza’s She’s Well Fit. Pre-race favourites, Expected from Mt Eliza, suffered some mechanical issues throughout the race, but came back and finished strongly in third place. Team Flippers from Koo Wee Rup Secondary College took out Design and Construction award.

Girls Open Class
Girls open category was down on numbers again this year but this didn’t stop victory taking place for the girls from St Margaret’s and Berwick Grammar School’s Ceto. Winning the class, Ceto managed to clock up 524 laps, ahead of Maiden Gully Community’s Hit or Miss achieving second place on 476 laps and St Margaret’s and Berwick Grammar School’s Cassiopeia on 439 laps in third. The girls from Cassiopeia also received the Design and Construction award in this category.

Open Secondary Class
Open Secondary showed a strong field of teams throughout the race, but it was St Margaret’s and Berwick Grammar School’s Zeus, with 570 laps who took the win. This placed them an impressive 6th overall ahead of Caufield Grammar’s BYO on 541 laps, and Dangerzone from Woodleigh School with 525 laps. Again, it was St Margaret’s School and Berwick Grammar’s Lynx who carried out the Design and Construction award. 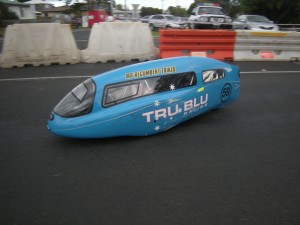 Community Class
With Community class making up the majority of the entry list throughout the weekend it was another exciting race for Tru Blu from Tru Blu racing. Putting their place into the history books, Tru Blu managed to get an impressive fastest lap time of 1.52.9 and a new distance record of 663 laps. The boys from Tru Blu covered a staggering 928 kilometres in 24 hours ahead of their rivals Aurora from Aurora Racing on 658 laps and Chalky from Trisled on 633 laps.

During the weekend we managed to catch up with Ben Goodall from Trisled so we could grab his thoughts on the Wonthaggi event:

[quote]”It’s all about having fun out there, and everybody should be enjoying racing this weekend” ~ Ben Goodall, Trisled[/quote]

This year was again taken out by EDEC’s Pace Makers with 511 lap, not far ahead of second place with Shagged from Maiden Gully Community on 507 laps. Last but not least saw Pop from Upper Beaconsfield Primary School take out third place on 477 laps.

Electra from St. Margaret’s and Berwick Grammar School managed to delight the judges with their impressive trike and took home the Design and Construction award in veteran community class.

Congratulations to all the riders and support crews who participated across the weekend. A huge thank-you must go to the sponsors and volunteers who help make the Wonthaggi Grand Prix a successful event.

We hope to see you all for the continuation of Victorian HPV Series for Round 3 at Knox on Saturday and Sunday April 27th and 28th 2013.

A reminder that entries for Round 4 at Casey Fields in Cranbourne close at 5pm Friday September 27th 2013.

About the Victorian HPV Series

The Victorian HPV Series takes place over four events, with teams collecting points at each round throughout the year.