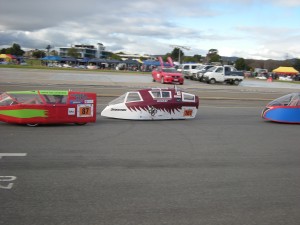 Round 2 of the Australian International Pedal Prix held in Victoria Park in Adelaide on Sunday 29th of July. The riders were greeted with a sunny day to start but showers throughout the day saw track conditions constantly changing and keeping the teams guessing as to what was going to unfold.

It must be a coincidence that the venue that we race in is called Victoria Park because 7 out the last 10 winners have all been from Victoria. It is a track that Victorian teams love to go to and have generally done very well. This weekend it was no different with Aurora racing again taking the win by 9 laps.

The race got underway with a dramatic crash at the first corner. Platt racing lead the record field of 184 into the first corner unfortunately they never made it all the way through the corner. They came to grief and with the rest of the field right behind them a few teams had no where to go and got caught up in the mess.

All was sorted very quickly and racing for the day was underway.

The race was stopped for 55min at the halfway point while a racing incident was dealt with. We would like to wish the rider a speedy recovery and hope to see them at Round 3. This stopping in the race gave teams the opportunity to service their vehicles and prepare for what the final 2 hours to the flag.

The racing was extremely fast throughout the day with the fastest lap of the race a 1.21 by Aurora. This is 4 seconds of the lap record. 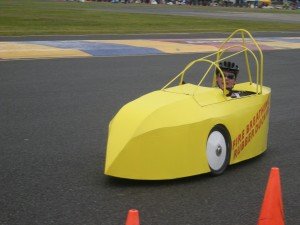 The primary category is always extremely competitive and today was no different. There were 76 entrants in this category and while it is the largest class in the race it is also an extremely important class as this is where the riders first learn their skills as a rider.

First place went to Aberfoyle Park with Rocket on 135 laps. Second place went to Chilli Pepper from East Para Primary School on 133 laps. Third place went to Flying Hubcabs from Aberfoyle Hub on 132. The leading all girls team was Hot M from Murrayville Community college on 128 laps. This also put them into 5th place in the class.

Category 2 produced a very exciting race finish. The first 2 teams were only separated by 1.06 seconds. Having lead for majority of the day and after their win in Round 1 the Fire Breathing Rubber Duckies from EDEC were in a close battle all day and were confident that they could hold all at bay. However in the end it was Ice from Immanuel College that passed them in the last 10min of the race to take the win. This left EDEC in second and Evolution from Aberfoyle park primary school in third on 158 laps.

The leading all girls team was SCR-1 from Scotch College on 133 laps. 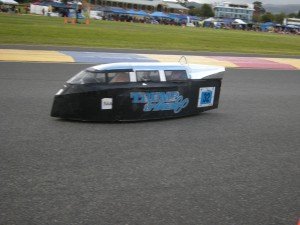 In a dominant display of racing Victorious Secret from EDEC again showed why there are the reigning AIPP all girls champions. The girls were able to comfortably open up an 8 lap lead and hold this throughout the race. They also

finished in 9 overall in their class. Second place went to Blur 1 from Loxton High School

The class was won by Paradox from Pembroke School on 174 laps. Second place went to Screaming Hubcaps on 166 laps and just 33 seconds behind them also on 166 laps was Green Edge from Xavier College.

Category 4 also decided the overall race positions for the day. After their early trouble on the first corner Platt racing who dropped 7 laps at the start of the race were able to recover and finish in 5th. A very fine effort considering the early trouble they had. In 4th place was Garry MK6 from Team Bluebird on 185 laps. Third place went to a Victorian team. Strathdale Racing who held this position all day had a comfortable 3 lap margin over 4th. In second was the leading South Australian vehicle in Outlaw from Team Ballistic on 190 laps. Whoever in first with a total of 199 laps was Aurora who extended their series lead over Ballistic. Aurora lead all day and never looked like being challenged for the lead.

The series concludes with Round 3 in Murray Bridge on the 15th and 16th of September for the 24 hour race. It will be an extremely interesting race for the series points with Aurora only holding a 2 point lead over Ballistic.

We hope all teams had a fantastic day and are looking forward to heading to Murray Bridge.

About the Author: Nathan Boon

Nathan Boon has been heavily involved with HPV's since 2003 when he began helping with Beaconsfield Primary School. Although never competing at the Energy Breakthrough he has ridden at almost every track in Australia. Since 2008, he has taken on a number of roles at the RACV Energy Breakthrough and you can often find him on the RACV track stage. Nathan is currently President of the Casey Cardinia HPV and Cycling Club who run the current Victorian HPV Series.