Are you interested in broadening your understanding of today’s world whilst helping young disadvantaged children? Team Rode RAGE is currently seeking two enthusiastic young persons to accompany their team on their newest mission in South East Asia.

The RACV Energy Breakthrough is constantly looking at innovative ways to inform young school students of the importance in creating a greener environment. The Rode RAGE (Ride Against Greenhouse Emissions) organisation, formed by high school students and volunteers have been taking huge strides in promoting the effects of greenhouse emissions on today’s world. The team of young people have provided funding for sustainable energy and food programs as well as a host of initiative schemes aimed at brightening our world.

Your chance to get involved

Following the group’s impressive tally of achievements the team has now set there sights on achieving there greatest challenge yet. That challenge is named the ‘Khmer Rode R.A.G.E’ journey. A journey which holds two available positions for any keen and enthusiastic young persons from the Energy Breakthrough community.

What is Khmer Rode RAGE? 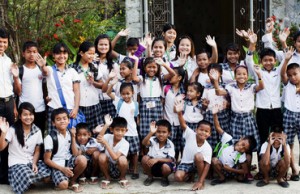 The Khmer Rode RAGE trip is an international journey which will allow team members the opportunity to contribute to regional issues facing both Thailand and Cambodian communities. Before heading to South East Asia the team will be working hard towards raising money to donate funds into both, a wildlife sanctuary in Thailand and an Orphanage in Cambodia in which the team plans to live and work within. The group will travel to Thailand in January 2013, where they will conduct work in a wildlife sanctuary helping injured and endangered animals return to their natural environments.

From Thailand the team is to venture on into Cambodia where the members of the Rode RAGE organisation will embark on a journey to a Cambodian orphanage. The team will spend time teaching the orphaned children English skills, as well as spending time teaching the children how to weld metal materials. The Rode RAGE members will help the orphans in producing their very own Human Powered Vehicles while the orphans utilising their new welding skills. The vehicles will essentially be used as a training tool for the kids to learn the basics of riding and maintaining their new HPV’s.

Helping to spread the Energy Breakthrough message into asia

The orphaned children will then put their skills into action as they aim to race against some of Australia’s leading hpv teams on Australian soil in the 2013 RACV Energy Breakthrough. John Stafford Energy Breakthrough event Convenor has continually pushed to gain interest in attracting more international teams to enter the Energy Breakthrough ever since the New Mexico team raced the 2009 event. John is actively helping the Rode RAGE team to ensure that the Cambodian orphans are given the opportunity to race in the 2013 event.

As well as creating the opportunity for others to join the team in the international travel, Rode RAGE is hoping to make the challenge of bringing the Cambodian orphans team out to the 2013 RACV Energy Breakthrough open to all members of the EB community and would love to hear from individuals or schools who would like to help with the fundraising or logistics. While the children compete in such a life changing event and learn more about the RACV Energy Breakthrough, the team will be on hand looking to extend their raised funds by asking the team’s trackside in donations to help make the orphaned children’s lives more comfortable in their Cambodian orphanage.

A unique combination of engineering, fitness, science and sustainability

The Rode RAGE team members have combined their unique interests in mechanical engineering, fitness, science and sustainability into making a difference to the world they see their children living in. While the sole purpose of their actions is to promote the changing environment the team also has felt they have benefitted from gaining industry skills, while growing and expanding their knowledge of technologies and sciences changing the modern world.

As we all know the world is continually changing and many people are forced to adapt themselves within their changing environments to accommodate their own needs. Currently Australians are the biggest per capita emitters in the world, meaning that we as Australians are the single largest contributors to polluting carbon dioxide into the atmosphere, the impact Australian lifestyles is having on our world is being experienced on a worldwide front.

[quote align=”center” color=”#999999″]“Rode RAGE was started because our students wanted to make a real and immediate difference to the world and to work toward a sustainable future for their children and our global neighbours” – team manager, Tony Davidson.[/quote]

The team has already completed many astonishing feats during their time spent conducting several environmentally friendly journeys using Hybrid and Human Powered vehicles to help promote their objectives. The organisation has already successfully completed The World Solar Cycle Challenge (2003, 2005), World Future Cycle Challenge (2007), a Sydney to Ballarat (1009kms) non-stop challenge in 2008 with a completed total time of 23:48 hrs. The team’s last journey was their Outback Rode R.A.G.E challenge riding from Darwin to Melbourne (3775kms) in 11 days in 2009. The team has maintained an impressive record of annual Energy breakthrough results across both Hybrid and HPV classes.

Team member Chloe Ridge-Burns added, “It can often feel like young people have no voice and can’t make a difference.  We know that as a result of our actions on Outback Rode RAGE that at least 37 families will never again know extreme hunger, 23 communities in East Timor have solar power and several million tonnes of greenhouse gases are not in our atmosphere and whilst that is exciting enough, who knows what sparks we set alight in the people who saw us? We certainly got a lot of positive feedback from the people we met and through www.roderage.com.au”

Will you join the Khmer Rode RAGE team?

The two available positions on the Khmer Rode RAGE journey are open to young people of ages from 16 to 25 looking at committing themselves to a life changing experience.

About the Author: Russell Nankervis

Russ Nankervis has grown up around Human Powered Vehicles, after his older brother Rowan got into them at high school. He's participated in a host of events across Victoria and South Australia for Bendigo South East SC, Bendigo Senior Secondary College, as well as community teams Strathdale and Aurora Racing.