The following calendar highlights key events, locations and dates for the RACV Energy Breakthrough Program and Event, as well as other related to human powered events, learning events.

The RACV Energy Breakthrough in Maryborough is a fantastic way to end the year on a high – but there’s also a host of other opportunities for you to take part in all year round.

For more information on each of these events, please contact the event organiser related to each listing or visit their website. We hope you and your team are able to enjoy yourselves, do some hands-on learning and have some fun!

Want to add an event of your own? Please Contact Us.

This event has passed. 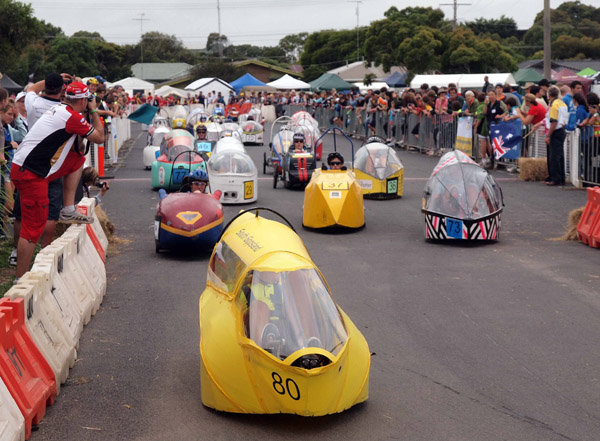 Primary students are involved in a series of pushcart races on the Friday. The pushcarts, which are built by the students, are based on the old “billycarts”. Students must be able to dismantle and assemble their pushcart on the day.

The Human Powered 24 hour race involves the racing of 3 or 4 wheeled recumbent vehicles around a 1.4km street circuit in Wonthaggi (view Grand Prix track). The race involves teams of 8 people and is a test of endurance for the vehicles and the competitors.

Competitors also have to present their vehicles to a panel of judges for scrutineering of safety features before being allowed to race.